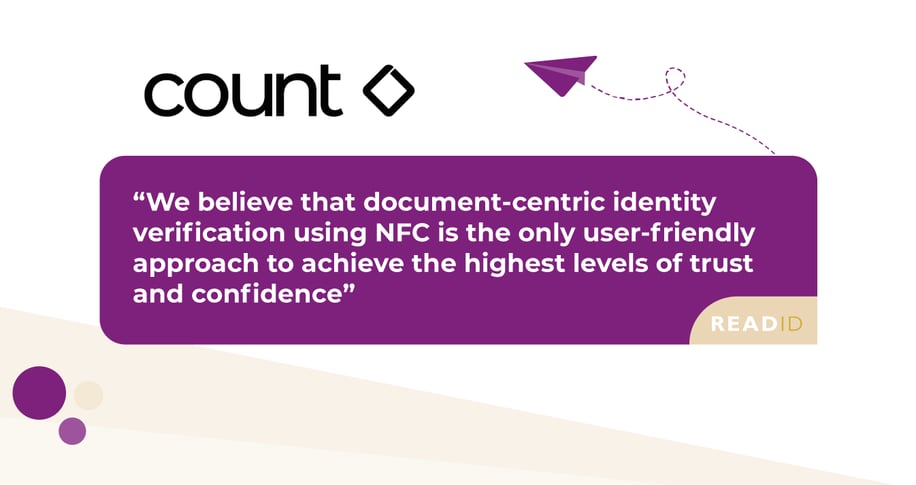 The Count wallet will enable users around the world to store personal information and digital assets. The wallet will give users full control over their data. Count will allow its users to transact in both the digital and organic worlds. Count will be optimised for transactions in the Web 3.0 and Metaverse. Count will be HDS, PCI DSS Level 2 and GDPR compliant as well as ISO certified.

“We believe that document-centric identity verification using NFC is the only user-friendly approach to achieve the highest levels of trust and confidence”, said Moritz Zippel, CEO of Count. “We expect to launch the first release of our biometric wallet later this year”.

ReadID contributes to the improvement of safety of transactions and reduction of fraud worldwide, using innovative verification technology which reads and verifies NFC-chips present in identity documents. It also allows ID cards and passports to be easily verified using a smartphone, for example during the onboarding process of new banking customers or for trustworthy onboarding into wallets. Under the revision of the European eIDAS regulation, identity wallets will play an important role.

Robin Smits, international sales director of Inverid, adds: “We are really pleased with the partnership with Count. Biometric wallets are an important component in the personal data eco-system. ReadID technology allows to add digital identities securely as well as with great user experience to the wallet.”

Safest and most accurate method of identity verification

Identity verification by means of NFC technology is widely known to be the most secure and accurate way of verifying identity documents, with the highest conversion. Unlike technologies such as optical verification, the ReadID technology is fully automated by making use of the smartphone to read and verify data from the chip inside the document. When combined with face verification, it is nearly impossible to commit identity fraud.

Inverid is known as a pioneer in remote identity verification technology and was the first to roll out the NFC app worldwide when it launched ReadID on Android in 2014 and on iPhone in 2019 respectively. The technology is scalable worldwide as it is based on broadly accepted standards such as ICAO. ReadID is already active in more than 18 countries with banks, financial institutions, governments, border control authorities, electronic identification and digital signature (“eIDAS”) trust services, plus many more. Its customers include the likes of the UK Home Office, Rabobank, ING, itsme, SK ID solutions and ASB Bank.

CMO & co-founder. Wil Janssen, PhD, has worked as an advisor, inspirator and researcher in the field of innovation and IT. Within the team, he is responsible for marketing. Over the years, he wrote over 70 publications in magazines and newspapers. He studied Computer Science at the University of Eindhoven and obtained a PhD from the University of Twente. In 2013 he founded Inverid together with Maarten.